April 17 - Redesigning for Our Future 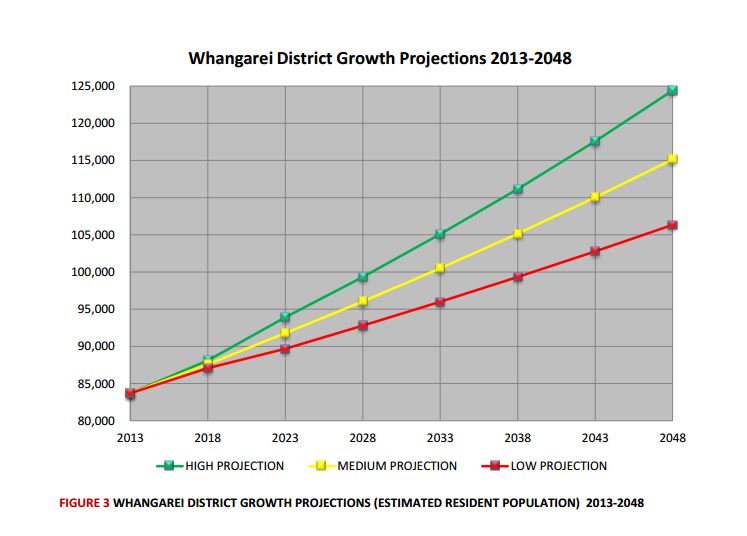 Whangarei has been accommodating growth at a significant rate for some years.  As at June 2016 the District’s population stood at 87,700 with 53,000 of those living in the urban centre of Whangarei (whangareinz.com).
WDC said in November 2016 our population increase is the highest in two decades. Last year the population increased for the second year in a row, with 1,800 new residents in the year to 30 June 2016.
Our 87,700 residents are a 2.1% increase on the previous year’s population. Just over half of this growth is in the urban area.
The Council’s 2014 Growth Model predicted 880 new residents (0.9% increase); the Growth Strategy 30/50 Sustainable Futures estimated 1.3% or around 1,000 new residents per annum.
Statistics New Zealand projections for the District over the next 30 years are much smaller, at 0.6% or 540 new residents per annum. “By any measure this has been a bumper year for Whangarei District,” WDC said in November.
The next national census is not until March 2018.
Council said our population is growing because more people are being born than are dying, and many people are migrating here from other places in New Zealand and overseas, and fewer people are leaving than in the past.
At 2.1% the year’s population growth is significantly higher than that estimated year-by-year in WDC planning documents.
Our increases in growth rate are significant and the District needs to consider how to accommodate the increasing strains on various sectors of our infrastructure. Planning for the future needs to be based on current growth rather than older data.
Consider the Te Matau a Pohe bridge which reached capacity within one year of completion instead of the ten years originally projected; and the State Highway upgrades which have been based on older data accurate for the rate of population growth then.
We are growing, and fast. There’s no way to hide it, and if we don’t address it by projecting future needs on best available data, our infrastructure will not support the growth we are sustaining.
The Long Term Plan (LTP) is being considered over the next six months.  Give it some consideration.  What do you want to see accommodated in the LTP? More subdivision, health system upgrades, transportation? More community and support facilities? Your rates will be used to put this planning into action so have a say, please.
Make your views known to your local councillor, and be a part of the process.
https://www.facebook.com/vince.cocurullo
https://twitter.com/cocurullo
https://www.linkedin.com/in/vince-cocurullo-b2a95825